Warning: Illegal offset type in isset or empty in /home/customer/www/amckinnis.com/public_html/wp-content/mu-plugins/cloudpress_applications/CloudPressApplications.php on line 744
 Arnie McKinnis | Why PokemonGo is historic & how to use it to market you business or product

Pokemon Go (PoGo for short) has done something historic and with its rocketship like popularity, there is a 100% possibility will mimic it, utilizing the same type of gameplay — one foot in the virtual world and one foot in the real. Augmented Reality Mobile games are going to be big, but before we lose interest in PoGo, let’s take a look at how businesses and marketers might leverage it as to increase business today.

The numbers are telling a huge story (all by themselves) about the global market we live in today: 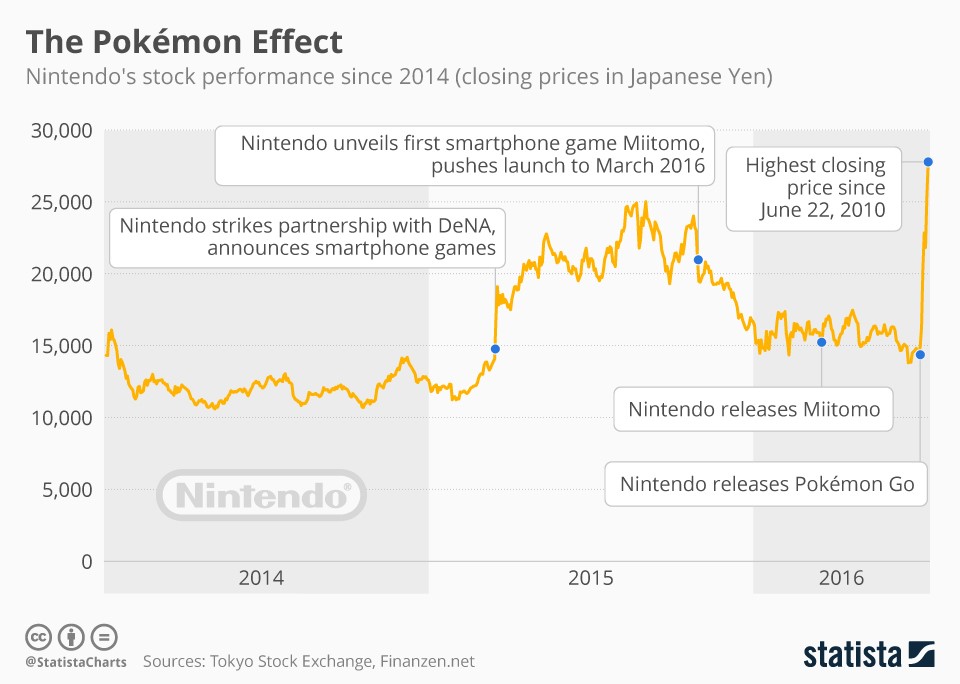 The first is about Nintendo itself. As you can see from the stock price chart above, Nintendo has been on an up and down journey. Investors were excited to see them push into the smartphone gaming world (2015), but were not at all excited about their first game. That has changed significantly since the release of Pokemon Go— they are heading towards a doubling of their stock price. Great for investors and if you owned stock in June, but that’s only part of the story.

Since the game is so new (it was launched July 6 – so we are GO + 10 days) it has become the most popular mobile game in history, and is quickly (think speeding freight train) surpassing almost all other mobile apps in pure numbers:

As of July 16 – there were 21 Million daily active users (I’d link to the source, but really, the numbers are moving so fast, by the time you read this, it may have doubled)

Based the charts below from SimilarWeb, the game is doing two things absolutely killing it on two important metrics for Mobil applications – Downloads and User Engagement.

Popularity can be a flash in the pan, and downloading an app is not the same as using the app.  Downloads happen, and the excitement they have create can quickly turn from the developers from “billion dollar babies” to “lost puppies” when those downloads don’t pan out to actual users.  Download numbers are important, but they end up being meaningless without user engagement – and as excited as someone might get with the number of downloads, it’s user engagement (keeping someone in the app) that makes money.

PoGo is killing it on both those metrics … it’s installed on more phones than Tinder and approaching Twitter-like engagement. 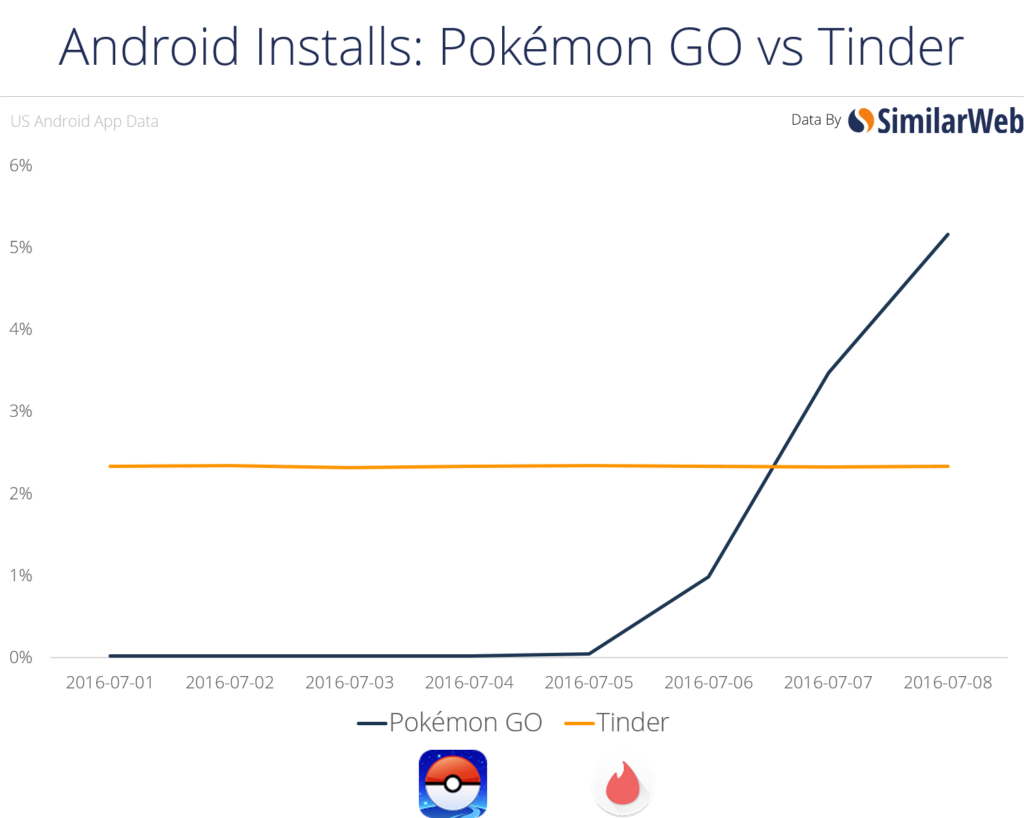 In the world of anything online, and especially mobile apps, usage is important.  Once again, there isn’t anything about PoGo that says “close me, don’t pay attention to me, leave me alone” – it is about paying attention to the screen – and right now, they are breaking records. 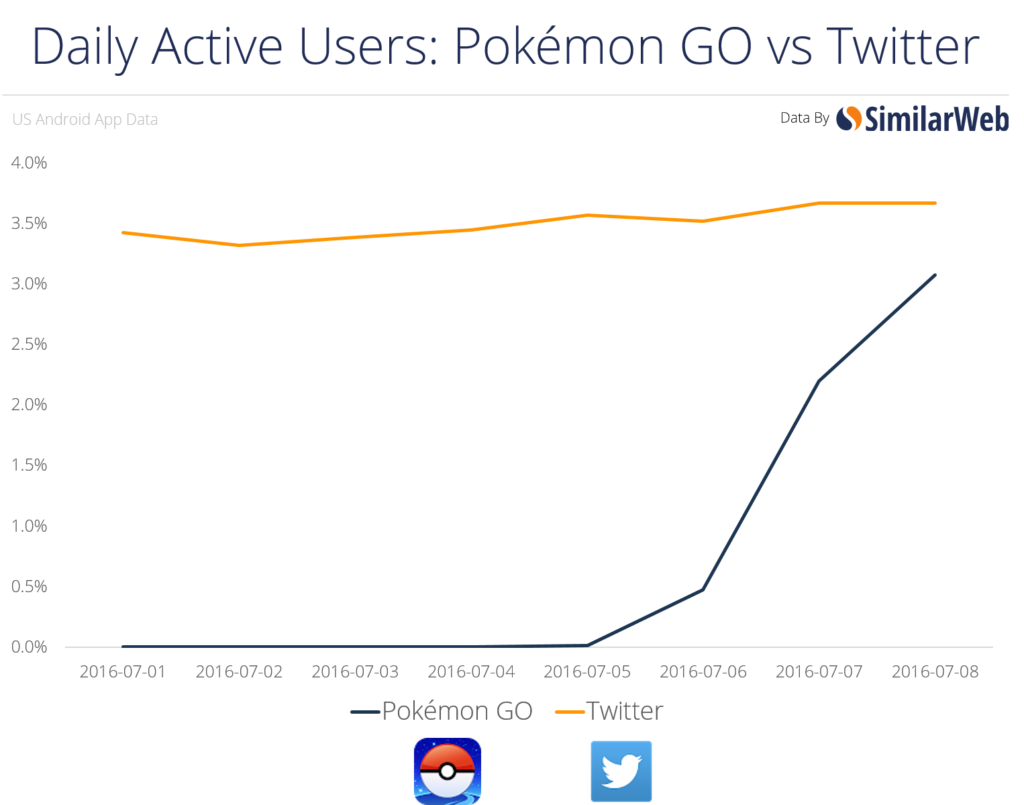 Unless you are watching videos or a movie, Pokemon Go is the reason you have to ask someone a question twice or their head is down, looking at their phone. Estimates right now (because the numbers are crunched all the time) say approximately 44 minutes — twice that of Snapchat, and about 30% more time than Facebook.

And the last number, which is important from a marketing standpoint is this: $1.6M – the amount of money the app makes each day – and expect that number to go up over the new few weeks. That’s from in-app purchases – but the numbers are just trying to keep pace.

Another important aspect of PoGo is this – it is transcending age barriers. From the very youngest phone user to the oldest, we are seeing people fire up the game and play it. You may think it would only attract those kids who grew up watching Ash and Pikachu, but it’s spreading across both age and gender lines
Think of the release of PoGo as the Biggest Megahit release of all time – breaking records and generally crushing it.


How can you take advantage of PoGo for your business?

Articles are popping up, providing some real world examples of leveraging Pokemon Go for your business and capitalizing on a virtual experience in the real-world.  It’s time to get your thinking and idea cap on and explore “making money”.  If you have no clue what the game actually does, just do a search and there are hundreds of articles available  – there are going to a thousands of tutorials, some free, some paid – it’s key you understand how the game works, the history of why it matters, and why the game is addictive.  This article doesn’t provide any of that.

The following are ways businesses and people are taking advantage of PoGo right now – and it’s just the tip of the iceberg.

Sure, this isn’t for everyone, but there are people already putting themselves out there as Pokemon Trainers (think of it as train the trainer) – and asking an hourly wage (up to $20 right now) in the real world to show people what they can do with their Pokemon.

2. Selling yourself $5 dollars at a time

Currently, you can go to Fivrr.com and purchase: A guide, Create Team Logos, Write Articles for You, Send you a Meme of you and your pokemon, change your social media profile picture to include a Pokemon of your choice.  And that’s just on that site – there are a growing number of ads on Craigslist, eBay, etc. offering to help you with the game.

3. PokeStops and Gyms – your business in the game

This game is completely different from the traditional “stay at home and play” game.  To play, you have to enter the real world.  Two key elements of that real world play are PokeStops and Gyms.  If your business is located close to one of these, Nintendo is bringing players to you.  You can thank them later, because they aren’t coming to you to purchase, they are stuck in the game playing.  It’s up to you to figure out how to turn the traffic into dollars.  Thanks to the internet and some very enterprising people – it has taken no more than 10 days to have a few ideas of how to do it.

Reddit is truly on of the best sites to monitor what’s happening in the world, from trends to business ideas.  Right now, there are over 500K members of the PokemonGo subreddit – and this one discussion has over 400 comments.  Read it to learn more, was a suggestion from one member to another – 6 days ago – on how to take advantage of the game:

Original Thread [link]: My local brew house is a Pokémon Gym, and they are offering discounted drinks for members of the team that holds the gym. PokémonGO is Awesome and I can get drunk for less money now!

Edit: They are now giving free t-shirts to the gym leaders!

Reply: If you want discounted drinks, take hold of the gym. To do so, you have to to that location to be able to battle. What will most people do when they’re there battling? Buy drinks!

Reply: As a manager for a store PoGo is fucking amazing. SO. MUCH. FOOT TRAFFIC. Time to invest in some lures.

Reply: Time to invest in some lures.

Reply: Omg… that’s brilliant. If there’s anything near my job, I’m doing this.  Edit: I want to believe some genius little kid out there has set up a lemonade stand on top of a gym in a park, set up a lure and is collecting all those sweet, sweet quarters.

Reply: what’s the difference between a lure and incense?

Reply: I was at the mall today and someone used a lure, and I snorlax appeared and everyone at the pokestops flipped

If you don’t understand the significance, don’t worry most of your fellow business owners won’t get it for a few more weeks — you’re reading this article now, so you’re ahead of the game – but here it is:

People gather at PokeStops and Gyms. Also, people want to find new Pokemon.  There are a couple in-game ways to “lure” Pokemon, they cost money.  For mom and dad, shelling out $100 for PokeCoins it may be a head scratcher, for you? You’re “investing” in your business that’s called advertising. And it’s cheap – forget how it works out to hourly charges, or per order.  Whatever metric you use to determine effectiveness – throw it out the window – because the PokeWorld is different.

Get creative with how to do it – discounts, free tshirts, giveaways – use all the traditional tactics, but wrap them around game play.  But think about how cheap that investment is to test it out.  And if you own a food truck or cart (or can sponsor one) – get to a gather place – it’s hot out there, why not help all those Pokemon seekers out with a cold drink or something to eat?

4. To play the game, you have to be in the real world

Game play, as stated several times, is all about getting into the real world (at least moving within the real world). My daughter, has spent more time running around parks in the last few days than she has in years. But Pokemon are everywhere, parks, parking lots, and the mall. Here’s a one quick idea for those that read this far … How about setting up a special charging station?

Capitalizing on this opportunity, and it’s red hot right now, demands a bit of creativity.  That’s what marketing is all about, being in the right place, with the right product, at the right time.  Although players are glued to their phones, game play demands being in the real world and that means they will be in and around your business – it’s up to you to get their attention.

The following are 7 ideas I’ve found to get your creative juices flowing:

We don’t know right now if Pokemon Go is a “fad”, how Nintendo will leverage its popularity, or anything else about the business possibilities with Augmented Reality Mobile games.  There are so many unknowns right now.  What we do know though is pretty important:

It may go away next month, but until them, the only question I have for you is … are you going to do it, or is your competition going to do it?  How simple is that?

I’m help companies with their marketing, specifically, product marketing.  I want to help you increase revenue from your products today, give me a call and let’s chat.

Coming Soon – my new site It’s The Product, Stupid! – training and advice on how to leverage new styles of marketing to increase sales for your product.  Go to the site, enter your email address and I’ll let you know when it’s live.